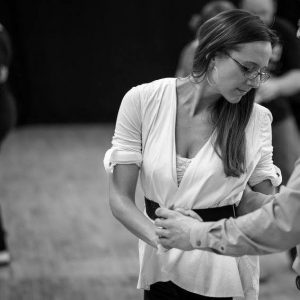 Kelsy brings her lifetime of dance training, a passion for vernacular dance, and a sharp eye for technique to the Blues dance world. She has brought her joy and knowledge of blues idiom dances to some of the most important and high-profile events in the US and abroad, including but not limited to: bluesSHOUT!, The Experiment, Muse, Hearken the Blues, and BluesGeek–serving as faculty, mentor, competition coordinator, and judge.

Kelsy’s critical eye and love of deep technique are tempered by her love of “dad jokes,” getting lost in the music, and embracing of the ridiculous. She shows her appreciation of African American culture by speaking of the history of Blues idiom dance and taking her craft seriously, but never herself. She believes every mistake is an opportunity to learn, every class an opportunity to challenge, and every dance an opportunity to pay respect to those who came before. 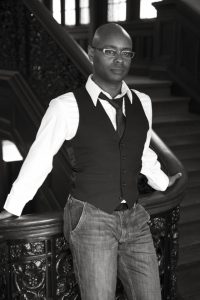 Damon has been dancing his entire life, starting with vernacular Jazz/Blues first taught to him at the tender age of six by his grandmother. After nearly a decade of learning at the heels of his elders, he went on and eventually studied a numerous dance forms until coming full circle in 1995 to focus primarily on the history and styles of Swing and Blues as his family danced them with a special focus on the Southern styles from the Mississippi Delta region. He has studied the development of vernacular Jazz/Blues dance across the United States learning from a number of the original dancers. He is largely regarded as one of the foremost authorities on Blues idiom dance and has been interviewed as a dance historian in documentary, radio, and newspaper. Damon has been a featured instructor at camps, festivals, and workshops across five continents.

Julie’s expressive dancing and joyful, playful connection are known throughout the country. With a background in performance and solo dance, she is best known for her solo blues, artistic choreography, and seamlessly integrating following with expression.

As a teacher, Julie presents material with a caring and light-hearted tone. She carefully crafts her classes and continuously tailors her material to fit the crowd at hand. Julie teaches regularly in her hometown of Boston, and has taught workshops everywhere from California to London.

Dan is immersed in the music and the movement. He constantly travels to continue learning, happily sharing his ideas along the way. In his teaching, Dan’s enthusiastic approach brings a focus on innovation, connection, and attention to your partner. Dan is also a veteran DJ, spinning for events across the continent and locally on a weekly basis, and has dabbled in organizing for events and local dances. In the end, Dan is most excited to push his dancing and to see his students break through their boundaries. 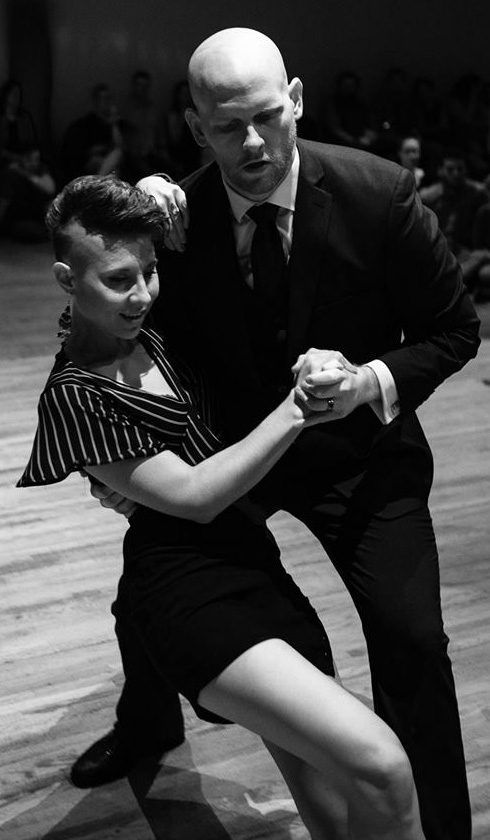 Krystal loves living in Huntsville, Alabama, although she is originally from southern Ohio. She has an uncanny energy and enthusiasm for blues music and dancing, and can often be seen at events all over the southeast and the US, closing down late nights, frequently dancing until dawn. She’s been partner dancing various styles since 2007; Blues stole her heart, however, in 2010, and has never let go. She has taught all over the US, ranging from small community -focused events all the way up to national events such as Blues Geek and the Blues Experiment. She’s a fierce competitor, frequently making finals at national blues dance contests, and brings her fervor for connection into all of her dancing and instruction. Her love of the dance is contagious, and she believes in injecting fun into all of her classes. 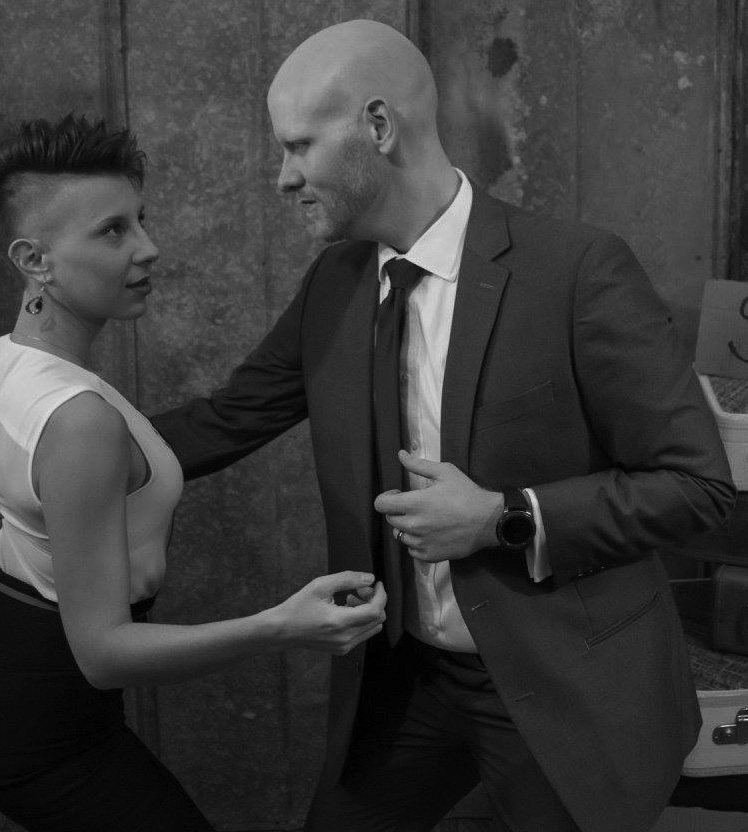 Adam is proud to call Huntsville, Alabama home, but he’s originally from Mississippi. He’s been partner dancing since 2004, starting in Ballroom, Latin street dances, and Lindy Hop, but he followed Krystal into blues in 2010, and it’s been his primary focus ever since. He’s passionate about social dancing and blues music, and loves to explore all different blues styles in his instruction and setlists. He strongly believes in teaching the context and history of the music and the dance, focusing on research in his spare time. His analytical approach to connection and value for intuition in dance provides a unique classroom environment that promotes self-awareness and improvement beyond the classroom. He believes in learning through experience and experimentation, so expect a LOT of getting up and dancing in his classes. 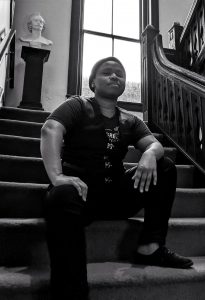 Grey found Blues dancing long ago when dancing with his grandfather as a child. At university he found others doing a dance similar to what he knew, and clung to the familiar music. Grey is internationally known for innovative classes, deep cultural context, an intuitive learning style and leaving students with a lingering feeling they have been changed beyond just dance. He loves to challenge students physically but also intellectually and emotionally, with his experience based teaching.

Personally he is striving towards elevating his technical skills and playfulness while dancing and brings that into his classes hoping to lead by example and show that we can always be learning. Grey writes obsidiantea.com, a site with helpful resources. Combine all this with his skill as a dancer, being known for musicality and performance, Grey has cultivated unique respect as an All-star division competitor in the USA.

When not dancing he writes Obsidian Tea: a blog about blues history and Black Culture. With a focus on race relations in America he strives to bridge the gap in understanding between two of major cultures in the US, through frank conversation and humor. He’s excited to be accepting more offers to lecture about his research. When not working Grey enjoys spending time with his cat, art and cooking. 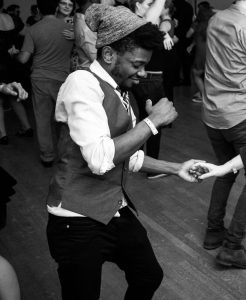 Joshua Purnell started dancing Blues years ago after being invited out by a friend. As a singer, he was not used to expressing himself through physical motion. In time, he discovered that feet can become drums, breaths; violin, and his hands could gain a voice and sing! He fell in love with dancing.

Known for his passion for connection, expressive musicality, bright welcoming energy, and warm hugs, Joshua strives to help his students find freedom in dance, so that they can discover the same passion that he has. One of his greatest skills as an instructor is his ability to diagnose difficulties and improve upon fundamentals, especially those of connection and partner communication.

For Joshua, dance is about an individual connection with each partner, distinct and musical, in a way that honors the music while paying tribute to where the dance comes from and where it’s participants and celebrants do as well.

You can find him dancing in Norfolk, Virginia, at the weekly Siren City Blues Night that he helps organize. If not there, he is likely in Columbus, Mississippi, his second home, where he spends late nights dancing to live Blues music, in bars, with anyone who will take his hand. 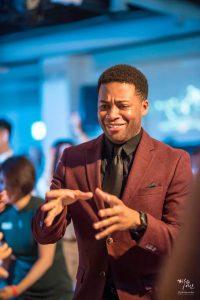 Kenneth Shipp hails from St. Louis, MO as an instructor who grew up dancing hip hop and breakdancing before jumping into Blues. He has spent the past few years passionately studying the family of Blues idioms, incorporating his nerdy personality along the way. Kenneth’s life experiences inform his dancing and wants his students to walk away with a better historical and contextual understanding to exhibit it in their dances. With every class and practice, he’ll encourage you to approach social dancing with coolness, relaxation, or in other words “Chill The F$%& Out.” When he’s not dancing, you can likely find him ranting about the latest blockbuster movie, game, or nerd convention.

Learn more about Kenneth at his Facebook page: https://www.facebook.com/commandershipp/.

For private lessons with Kenneth, you can reach him here: https://docs.google.com/forms/d/e/1FAIpQLSfyfii9XK2Z84zjZgqCH1pVvGGh-6WgpbsdD-Iq0EcGYzNHaw/viewform?usp=sf_link 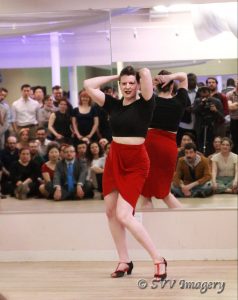 Andi lives and dances in Grand Rapids, Michigan, where she hosts the local scene- but she also counts Chicago as her dance-home away from home. Andi values creativity, exploration, and feeling good about your own dancing; and loves to nerd out about different styles of dance, different ways to partner with each other, and how to dance your values. As a follow, lead, or solo dancer she’s done a bunch of exciting things- including presenting multiple choreographies at events like Sweet Mo’ and bluesSHOUT!, finaling and placing at open, invitational, and all-star level comps, and teaching at events around the US. Andi is always excited to dance, whether it’s with an old friend or someone new to blues- so ask her for a dance or two!